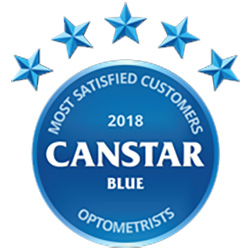 Most Satisfied Customers | Eyecare Plus

Eyecare Plus has taken top spot in Canstar Blue’s 2018 customer satisfaction ratings for optometrists, recording five stars in most research categories, including service & advice, range of products and after sale service.

Consumers see Eyecare Plus as a winner

We often don’t realise that our eyesight is starting to fail until it quite literally smacks us in the face! We blame the bad lighting, or that the menu font being written too small to read, and before you know it, it all starts to get a little blurry! While it could be down to one of many reasons, getting your eyes checked on a regular basis is a smart move to avoid future problems.

In Canstar Blue’s latest survey on this subject, 14% of adults admitted that they get their eyes tested less frequently than every two years – meaning they could probably do with another check-up! The majority of respondents said they get their eyes checked every one to two years (60%), while 22% do so every six to 12 months and a very enthusiastic 3% visit their optometrist every six months, or more frequently.

While the majority are sticking to the recommended frequency, eyesight can change a lot in that period of time, with survey respondents changing their glasses almost every three years, on average, indicating that it’s something that we need to… keep an eye on.

With eyesight clearly important, it becomes a question of who to turn to for your regular eye tests. 63% of Aussies said they always visit the same optometrist, with good customer service & support the most common reason for doing so, well ahead of convenience and price. Ultimately, the frequency with which you visit your optometrist could come down to whether or not you enjoy the experience – and that will depend hugely on the service you receive.

To help narrow down which optometrist may suit you best, our survey of more than 3,000 people – who have visited one of Australia’s many chains in the last two years – can provide some guidance. We asked consumers to rate the optometrist they most recently visited on a range of important factors and this is what we found: